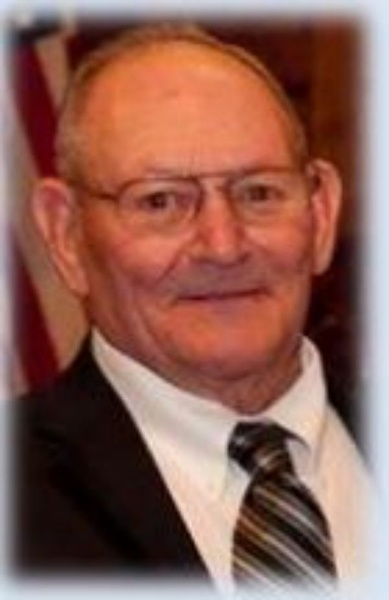 Wendell Russell Wentling, age 88, of Hendley, Nebraska passed away on Saturday, September 26, 2020 at Good Samaritan Homes in Sioux Falls, South Dakota. He was born on July 23, 1932 in Beaver City, Nebraska to John Russell and Vivian (Livingston) Wentling. He graduated from Beaver City High School with the class of 1949 and married Dortha Ann Martin December 21, 1950 at her parent’s home near Hendley, Nebraska. In those days he played baseball for Beaver City Legion and town baseball teams, and as a left-handed pitcher was known as “Lefty” to many. He worked for Beaver Valley Implement Company after graduation until 1956 when he became co-owner of M & W Standard Service with his father-in-law, Arthur (Dutch) Martin. Later, in the 1960s he bought out his father-in-law’s share and the business became Wentling Standard Service. Wendell and Dortha had that business until they sold it in 1974. In the mid-‘60s, they obtained the contract for the star mail route hauling mail from Holdrege to Wilsonville (later just to Hendley) in the mornings and back in the afternoons, and he had that contract for over 30 years. About 1969, they bought a farm southeast of Beaver City and farmed that land. Dortha died of cancer on December 3, 1975, and Wendell married Goldie Hutchens on March 9, 1979. They then sold the land near Beaver City and farmed Goldie’s land near Hendley for nearly 30 years. Wendell lived his entire life within 10 miles of Beaver City until October 2019 when he moved Sioux Falls. Wendell was not a religious man, but emphasized honesty, integrity, and responsibility in raising his kids. Late in life Goldie led him to a saving knowledge of Jesus Christ. Thank you Goldie! That is the only thing that matters to him now and forevermore! Wendell was preceded in death by his parents, his sister Barbara (Joan) Parrish, his first wife Dortha and his daughter Kaye Linner. He is survived by wife Goldie, sons Gayle (Margo) Wentling of Billings, Montana and Kim (Dawn) Wentling of Gillette, Wyoming, son-in-law Doug Linner of Hendley, brother-in-law Dean Parrish of Beaver City, stepdaughters Kathy (Bert) Jesseph of Gothenburg, Nebraska and Joyce Frasier of Sioux Fall, South Dakota, “adopted son” Arlon (Patty) Fuller of San Antonio, Texas, and several grandchildren and great grandchildren. Funeral Services will be Saturday, October 3, 2020 at 11 a.m. at Faith Community Church in Beaver City, Nebraska, with Pastor Daryl Kats officiating. Visitation will be Friday, October 2, 2020 from 5 p.m. to 7 p.m. at Wenburg Funeral Home in Beaver City. Interment will be at Mt Hope Cemetery in Beaver City. In lieu of flowers, please feel free to give a donation to The Faith Community Church of Beaver City or a charity of your choice. Wenburg Funeral Home is in charge of arrangements. Condolences and personal reflections may be left at wenburgfuneralhome.com.

To order memorial trees or send flowers to the family in memory of Wendell Russell Wentling, please visit our flower store.
Send a Sympathy Card