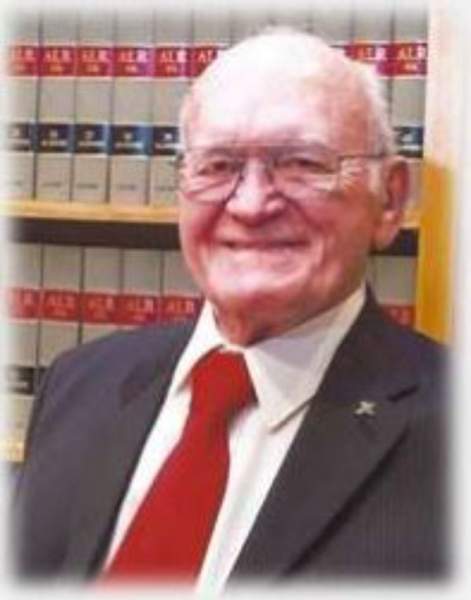 Ward Clarence Urbom, age 99, of Arapahoe Nebraska passed away on Thursday, February 4, 2021 at the CA Mues Good Samaritan Center, in Arapahoe. Ward was born on February 2, 1922 at Atlanta, Nebraska to Clarence Andrew Urbom and Anna Myrl (Irelan) Urbom. He grew up in Arapahoe, Nebraska and graduated from Arapahoe High School in 1938. Ward received his bachelor’s degree from the University of Nebraska. He served in the Army Air Force in World War II and was trained as a bombardier. He flew and completed thirty missions aboard the B-24 “Tail Wind” and was discharged as a First Lieutenant in September, 1945. Ward married Darien Jenette Hermes on May 26, 1946. He graduated from the University Of Nebraska School Of Law in 1948. He and Darien made their home in Arapahoe, Nebraska, where they were long-time members of Trinity Lutheran Church. He was active in many aspects of the Church at both the local and state levels and served on many community boards and organizations. Ward practiced law in Arapahoe until he retired at age 91 in 2013. He is survived by his wife, Darien Urbom of Arapahoe, Nebraska; daughter Dwana Mues and her husband Gary Stromberg of Kearney, Nebraska; son David Urbom and his wife Christine of Arapahoe, Nebraska; and son Kevin Urbom and his wife Mitzi of Arapahoe, Nebraska. He is also survived by grandchildren Adam Mues, Colin Mues, Erin Urbom, Jonathan Urbom, Sarah Urbom Maaske, Chris Clouse, Jeremy Clouse and Lyndzie Clouse Holtze and 17 great-grandchildren. Ward was preceded in death by his parents, his brother Warren Urbom, his sister Beverly Dutcher and a son-inlaw, Wesley Mues. A private family interment will take place at the Arapahoe Cemetery with Rev. James Moshier officiating. In lieu of flowers, memorials may be directed to Trinity Lutheran Church. Wenburg Funeral Home of Arapahoe, Nebraska is in charge of the arrangements. Condolences and personal reflections may be left at wenburgfuneralhome.com.

To order memorial trees or send flowers to the family in memory of Ward Clarence Urbom, please visit our flower store.