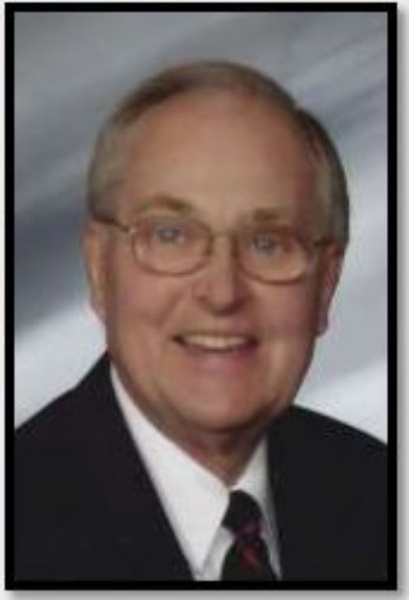 Waldemar L. “Wally” Janssen, age 85, of Kearney, Nebraska passed away on Monday, July 6, 2020 at the Prairie View Garden Assisted Living in Kearney, Nebraska. He was born on September 17, 1934 to Harm and Caroline (Kamprath) Janssen in Seward, Nebraska. He grew up in Arapahoe and graduated from Arapahoe High School with the class of 1953. He enlisted into the U.S. Air Force and served from 1952 until 1956. On June 17, 1957 he married Mary Jo Frost in Los Angeles, California. They moved to Colorado Springs, Colorado for 1 year and then to Lexington, Nebraska for several years working construction and in the hardware business. They lived in Gothenburg and McCook, Nebraska before returning to Arapahoe to own and operate the Coast to Coast Hardware store. They owned the store for 24 years and then retired in 1999 when they moved to Kearney, Nebraska. They loved to go camping and follow their grandchildren in all their activities. He was a member of the Trinity Lutheran Church of Arapahoe, before becoming a member of the Holy Cross Lutheran Church of Kearney, Nebraska. In 2008, Mary Jo passed away. On May 18, 2010 he married Ruth Pigott and made their home in Kearney. He is survived by his wife Ruth Janssen of Kearney, Nebraska, son Gary and wife Susanne Janssen of Alma, Nebraska, daughter Rowan Buckley and Heather Volker of Minneapolis, Minnesota, Grandchildren; Blaine (Allison) Janssen, Brent Janssen, and Brandie Janssen and fiancée Troy Bland, sister-in-law Donna Janssen of Arapahoe, Nebraska, brother-in-law Doug and wife Jan Frost of Fort Collins, Colorado He was preceded in death by his parents, wife Mary Jo, brothers Brunno, Gilbert and wife Gretel Janssen, and Reinhold Janssen. There will be no viewing or visitation. Funeral services will be on Friday, July 10, 2020 at 10:30 AM at Trinity Lutheran Church in Arapahoe, Nebraska with the Rev. James Moshier, officiating. Interment will be at Arapahoe Cemetery, Arapahoe, Nebraska. Wenburg Funeral Home of Arapahoe, Nebraska is in charge of the arrangements.Condolences and personal reflections can be left at wenburgfuneralhome.com.

To order memorial trees or send flowers to the family in memory of Waldemar L. “Wally” Janssen, please visit our flower store.