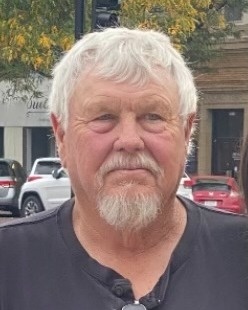 Steve Pearson, “Farmer”, age 71, passed away suddenly on Saturday, October 8th, 2022. He went exactly the way he wanted to… driving on his land, with his dogs. Having lived almost his entire life in Arapahoe Nebraska, it was rare to find someone who didn’t know who Steve Pearson was. Steve was born on December 17th, 1950 in Oxford, Ne and graduated from Arapahoe High School in 1969.

He then attended Central Community College in Hastings for automotive repair and began working at John Deere. The summer of 1972, Steve married the love of his life and girl of his dreams, Linda Hines. Steve then went on to become an avid entrepreneur and owned many small businesses. His main career paths included S & L Oil Company, Elk Creek Backhoe, Trenching and Trucking, and finally County Commissioner.

Steve was an outdoors man through and through and could always be found in his side-by-side or doing some sort of project on his ground. He was a strong advocate for land and wildlife conservation and was extremely passionate about hunting and fishing. Steve was also involved in groups such as Pheasants Forever and Issac Walton League. Steve loved going to gun shows/auctions and had vast collection of such. Steve was a “die hard, bleed red” Husker fan on Saturdays and a big part of “Raider Nation” on Sundays. Nothing could ever compare to the love that Steve had for his dogs, especially Jack Russell Terriers.

Steve was the epitome of “if you give a man a fish, you feed him for a day but if you teach a man to fish, you feed him for a lifetime”. Throughout his life with family, friends, and even strangers, Steve was constantly offering to spread his wisdom to help the most he could. Even after losing his beloved wife, Steve always made it top priority to attend each and every one of his daughters and granddaughters’ events. Steve had an impeccable memory for his family members birthdays; without a doubt, you were waking up to the entire “Happy Birthday” song being sung to you, bright-eyed and brushy tailed. If you were lucky enough to spend any given amount of time with Steve, you were inevitably blessed with a special nickname that would stick for life. Steve was the best all girl dad, grandpa, great grandpa, and brother ever. He was a man that lived well, laughed often, and loved so much. Steve’s presence on earth will be missed deeply but his legacy and memory will live forever in our hearts.

Visitation will be Tuesday, October 11, 2022, from 5 PM to 7 PM at Garey Funeral Home, 652 Main St. Arapahoe, Nebraska. Funeral service will be Wednesday, October 12, 2022 at 10:30 AM at United Methodist Church of Arapahoe, Nebraska with Pastors Joel Rathbun and George Probasco, officiating. Interment at Arapahoe Cemetery, Arapahoe, Nebraska. Livestream video will be available at “FUMC Arapahoe” Facebook page.  In lieu of flowers, memorials are suggested to the Izaak Walton League of America-Arapahoe Chapter.

To order memorial trees or send flowers to the family in memory of Steve Pearson, please visit our flower store.