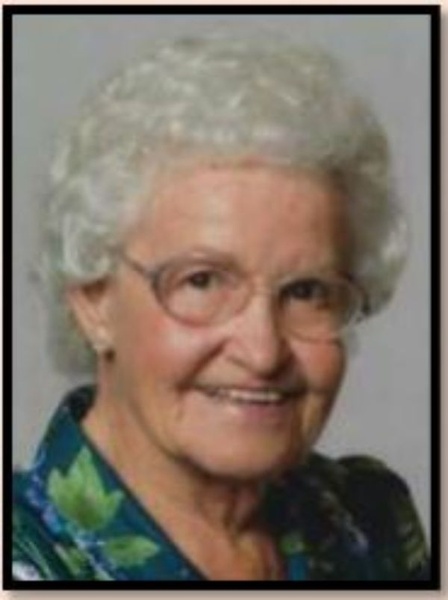 Marjorie May ten Bensel (Huxoll), 94 years of age, of Arapahoe, Nebraska, died on Tuesday, December 24, 2019 at the Assisted Living Center at the Seward Memorial Hospital in Seward, Nebraska. She had lived in Seward for the past two years after suffering a pelvic fracture. Marjorie was born on May 21, 1925 on a farm northwest of Arapahoe to Frederick and Laura Louise (Koeteman) Huxoll. She was the oldest of twelve children. She was baptized and confirmed in St. Matthews Lutheran Church. She was united in marriage to Clarence “Joe” ten Bensel also at St. Matthews on September 8, 1947. To this union four children were born: Ruby, Jerry, Robert, and Debra. Marjorie was active in many church and civic organizations to include the VFW Auxiliary, an officer on the Arapahoe Cemetery Board, and the Lutheran Women Missionary League. She volunteered at the Mission Mall. Marjorie learned to play the piano at a young age carrying cream in a wagon to pay for her lessons. She later played the organ for services at Trinity Lutheran Church, and also played the bells in the Trinity Bell Choir. She played for numerous weddings and at the Good Samaritan rest home. She attended many events at the Tassel with friends and also square danced. Marjorie loved music and continued to play the organ and piano until her death. She also loved to travel, and would take off on any trip at the drop of a hat! In 2012 Marjorie served as the Grand Marshall for the Prairie Pioneer Days Parade. After her husband, Joe passed in 1975, Marjorie continued to operate Joe’s Package Store which they co-owned. She ran the store for many years making many friends (in addition to her regular customers), until she retired from the store in 2002. She was preceded in death by her parents, her husband, Joe, brothers Laurel, Wayne, and Martin Huxoll; sisters Violet Hilker, June Tracy, Betty Riepe, and Isabelle Pfeiffer; her son-in-law Norris Zook, and grandsons Todd Zook, Derrick Hanke, and Zachary Hanke; father-in-law Clarence H. ten Bensel; brothers-in-law Chester Hilker, Clarence Tracy, Buddy Riepe, Lloyd Golter, and Alvin Pfeiffer, and sister-in-law Beverly Huxoll. She is survived by her daughter Ruby Zook of Holt Summit, MO; sons Jerry ten Bensel (Teresa) of Arapahoe, and Robert ten Bensel (Christi) of Seward, Nebraska, and daughter Debra Fisher (Darrell) of Lincoln, NE, granddaughters Stephanie Hanke, Kim Neubauer (Tom) Erin Konz (Ryan), Shannon Noudaranouvong (Chone) and Cailin ten Bensel, (Zach Johnson) grandsons Joe (Jen) and Drew ten Bensel, great-grandchildren Hannah, Madison and Emilee Hanke, Lauren and Andrew Neubauer, Georgi and Jaxon ten Bensel, and Kaiya and Kalen Nourdaranouvong; brothers Chuck, Norman, and Jim Huxoll all of Holbrook, and sister, Twyla Golter of Flagstaff, AZ; brother-in-law Lawrence ten Bensel (Barbara) of Spring, TX; sisters-in-law Judy Huxoll of Beaver City, and Emma Haskins of Maricopa, AZ., Brenda Huxoll of Cambridge, and Dorothy Huxoll of Holbrook, numerous nieces, nephews, and a host of friends. Visitation will be Sunday, December 29, 2019 from 2 PM till 7 PM with family present from 5 PM till 7 PM at Wenburg Funeral Chapel, 652 Main St., Arapahoe, Nebraska.Funeral services will be on Monday, December 30, 2019 at 10:30 AM at Trinity Lutheran Church in Arapahoe, Nebraska with the Rev. James Moshier, officiating. Interment will be at Arapahoe Cemetery, Arapahoe, Nebraska. Wenburg Funeral Home of Arapahoe, Nebraska is in charge of the arrangements. Condolences and personal reflections can be left at wenburgfuneralhome.co

To order memorial trees or send flowers to the family in memory of Marjorie May ten Bensel (Huxoll) , please visit our flower store.
Send a Sympathy Card