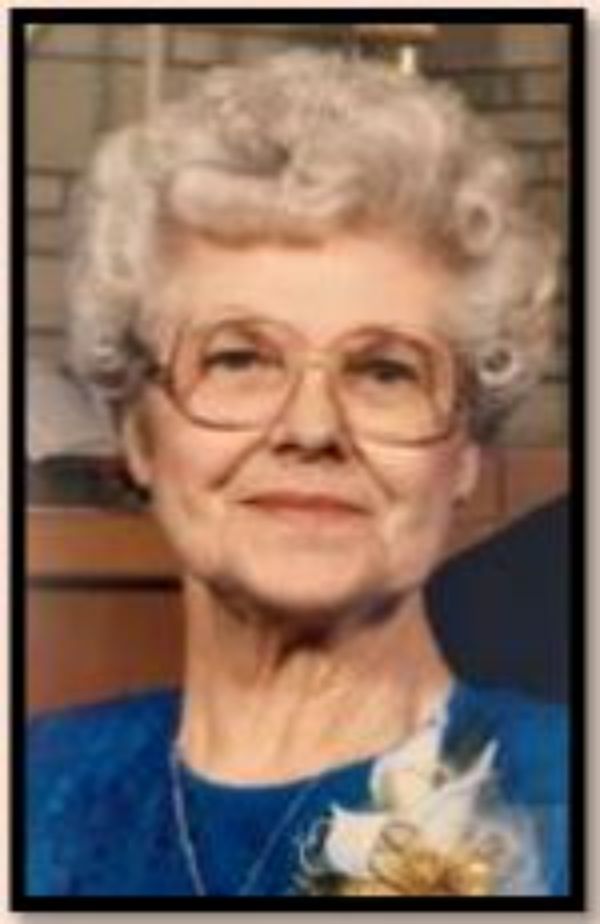 Lois Berdina (Stillman) Helms, age 95, of Arapahoe, Nebraska passed away on Tuesday, June 25, 2019 at the C.A. Mues Good Samaritan Society in Arapahoe, Nebraska. She was born to Herman and Meta (Haussler) Stillman on March 27, 1924 in the newly built family home northwest of Arapahoe. She attended St. Matthews Lutheran Church, northwest of Arapahoe, where she was baptized April 1, 1924, completed eight years of education in the parochial school and confirmed on May 31, 1936. Lois married Clarence Helms on February 16, 1944 at St. Matthews Church. After their marriage, she followed Clarence to Camp Pendleton, California before his deployment to Germany during World War II. After the war, they moved to the farm north of Holbrook, Nebraska, which they purchased, raised their four boys and lived on for 60 years. Lois and Clarence held their farm sale in September of 2005 and moved into Prairie Pines Independent Living Center in Arapahoe, NE. They then moved into the Good Samaritan Home in 2011. Lois played the organ for over 50 combined years at St. Matthews and St. Paul’s Lutheran Church in Cambridge, Nebraska. She also taught Sunday and Saturday School and was a faithful servant of the Lutheran Women’s Missionary League. Lois supported her family in their farming and Polled Hereford business, was a longtime member of the Hereford Pollette Auxiliary. She also served many years with the VFW Auxiliary of Holbrook and the Holbrook Toastmaster’s Club. Her hobbies were quilting and embroidering and she gave many of her handmade masterpieces to others, including a quilt to every grandchild upon their high school graduation. She was well known for her homemade pies, especially sour cream raisin and Angel Food cake. Lois enjoyed baking and tending her flowers. Her greatest joy were her grandchildren. Lois was preceded in death by her parents, Herman and Meta (Haussler) Stillman; husband, Clarence; sisters, Adelia (Hollis) Clausen, Lillian (Henry) Helms, brother, Paul (Barbara) Stillman, and many brothers-in-law and sisters-in-law. Survivors include sons Lanny and wife Martha of Arapahoe, Randy of Holbrook and fiancée Glenda Leithoff of Litchfield, Dick and wife Bonnie of Arapahoe and Bruce and wife Sue of Holbrook; nine grandchildren, Melanie (Rev. Ted) Olsen, Sarah (Titus) Staples, Cody (Casie) Helms, Sheree (Tom) Burford, Hannah Helms, Bryan (Shannon) Helms, Kyle (Kayla) Helms, Molly (Chris) Blickenstaff, and Cory (Katie) Helms. Her eighteen great-grandchildren are, Aimee, Ashlee and Abbee Olsen; Madilyn, Abraham, Samuel and Laura Staples; Hayden and Kylan Helms; Kaden Helms; Savannah Helms; Lillian and Abbigail Helms; Carter, Wyatt, Amelia and Beau Blickenstaff and Harrison Helms. As a strong Christian wife, mother, grandmother, great grandmother, friend and witness to her faith, we know she has joined Clarence and her family in Heaven and waits for others to join her. Visitation will be from Sunday, June 30, 2019 from 4 PM till 6 PM at Wenburg Funeral Chapel, 652 Main Street, Arapahoe, NE and prior to the service at the Church. Funeral services will be held on Monday, July 1, 2019 at 10 am at Trinity Lutheran Church, 1005 9th St, in Arapahoe with Rev. James Mosher, officiating. Burial will be in the Arapahoe Cemetery beside her husband Clarence of 70 years. Memorials are suggested to Trinity Lutheran Church Youth Ministries. Wenburg Funeral Home of Arapahoe, Nebraska is in charge of the arrangements. Condolences and personal reflections may be left at wenburgfuneralhome.com

To order memorial trees or send flowers to the family in memory of Lois Berdina (Stillman) Helms , please visit our flower store.
Send a Sympathy Card