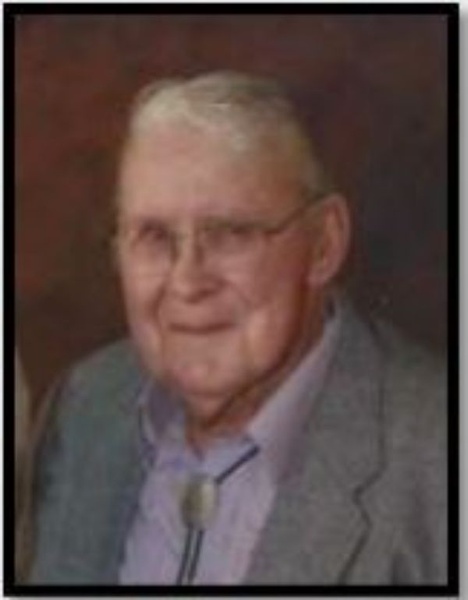 John Ernest “Ernie” Stalder, age 92, of Beaver City, Nebraska passed away Monday, January 7, 2019 at the Beaver City Manor in Beaver City, Nebraska. He was born September 14, 1926 to John Ernest Sr. and Edith (McCormack) Stalder at the family farm near Long Island, Kansas. He was the third of seven children. The family moved to the farm south of Beaver City when Ernie was four years old. He attended country school at Spring Green near his family’s farm through the eighth grade, quitting then to help on the family farm. He loved being a farmer, raising livestock, planting, and harvesting, helping neighbors as they helped him. He retired from farming in 1998. Ernie was inducted into the United States Army on May 8, 1945 at Ft. Morgan, CO and trained as an Antitank Crewman at Camp Hood, TX. After completing his training, he was sent to Naples, Italy as a PFC, Longshoreman 271 and was stationed there for 13 months. He was honorably discharged February 4, 1947. He was a longtime member of the American Legion Post #28, held a number of offices and was instrumental in getting the Memorial Day Avenue of flags set up. After serving his country he worked for Consumers as a lineman in the northern part of the state. While there he met Katheryn Sklinar and they were married. The couple separated in 1954. On November 9, 1957, Ernie and Joy Schleicher Lambert were united in marriage, and he adopted Joy’s two sons, John Richard and Douglas Kent. While living on a farm in Norton, Kansas they began fostering children in need of a home and Sherry Rhodes became a part of their family and was loved as their own. Ernie accepted the Lord as his Savior as a teenager and attended the Methodist Church with his family. He was always active in church, he enjoyed attending and helping where he was needed. Ernie and Joy belong to the First Presbyterian Church, but after it became difficult for him to get around, they began attending the Faith Community Church and enjoyed being a part of their congregation. He was preceded in death by his parents, son Douglas, sisters, Darlene Anderson, Maxine Bishop, Dorothy Lambert, brothers, Donald and Leo, brothers-in-law Floyd Anderson, Wesley Bishop, Arlyn Lambert and Max Hunt, sister-in-law Ruth Stalder, in-laws Richard, Goldye, and Evelyn Schleicher. He is survived by his wife Joy Stalder of Beaver City, Nebraska, son Rick and wife Sandi Stalder of Amarillo, Texas, daughter Sherry & husband Jaydee Williamson of Hollinger, Nebraska, Daughter-in-law Tami Stalder of Arapahoe, sister Doris & husband David Sydow, grandsons Kirk (Michella) Stalder, Shelby (Lisa) Amen, Talon Williamson, Derek Vanderzee, granddaughter Lorissa (Rick) Williams, sisters-in-law Janice Hunt, Lynda Bass, and Jerry Stalder, his great grandchildren and many nieces, nephews, and friends. Viewing and visitation will be Thursday, January 10, 2019 from 4 P.M. till 7 P.M. at Wenburg Funeral Home in Beaver City. Funeral services will be held on Friday January 11, 2019 at 10:30 A.M. at the Faith Community Church in Beaver City, Nebraska with Pastor Daryl Kats officiating. Interment will be at the Mount Hope Cemetery, Beaver City, Nebraska. Wenburg Funeral Home is in charge of the arrangements. Condolences or personal reflections can be left at wenburgfuneralhome.com

To order memorial trees or send flowers to the family in memory of John Ernest “Ernie” Stalder , please visit our flower store.
Send a Sympathy Card