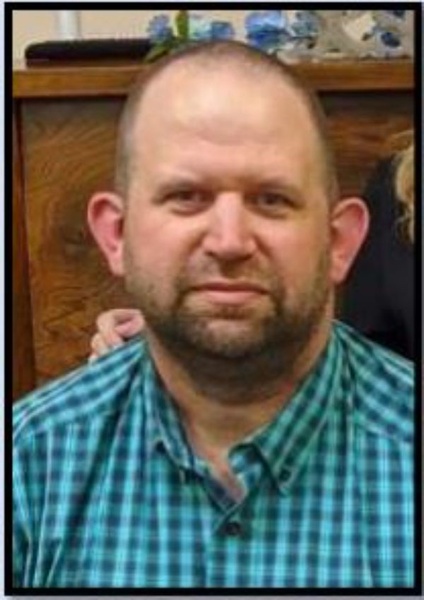 Jeremy David Eidson, age 43, of Edison, Nebraska, a loving husband and caring father passed away on Saturday, November 27th, 2021 at Cambridge Hospital, Cambridge, Nebraska. He was born on July 8th, 1978, at Omaha, Nebraska to Catherine Barkley and David Eidson. He grew up in Gretna living with his grandparents helping on the family dairy and farm before graduating from Gretna High School in 1996. He then moved west to attend Nebraska College of Technical Agriculture where he met his wife of almost 23 years, Julie Kennicutt of Arapahoe. He then made his home in her small community working in feedlots, Fairview Vet Clinic, NPP/Maschhoffs, and then finally for Ag Valley Coop of Edison, Nebraska. He enjoyed having a side business of custom haying for neighbors, which he wanted to teach his kids. He has been a part of the Elwood Rodeo Club for 22 years, where he enjoyed helping with the yearly Rodeo during the fair. He secretly enjoyed his wife bringing home stray cats as he snuggled with them just as much as everyone else did. The kids enjoyed making pinewood derby cars with him and staying home and watching the stupid funny movies. He is survived by his wife Julie (Kennicutt) Eidson, three daughters Danielle, Rylee, and Courtney Eidson, son Kolter Eidson of Edison, Nebraska, grandparents/guardians Charles and Sharon Barkley of Cumberland, Iowa, mother Catherine Thares of Fremont, father David Eidson of Bellevue, sisters Janice Richman (Jason) of Lincoln, Nebraska, and Patricia Peterson (Chase) of Norfolk, Nebraska, father and mother-in-law Melvin & Paula Kennicutt of Arapahoe, Nebraska, brother-in-law’s Tracy Kennicutt, Kory Kennicutt (Lisa) of Overton, and Ryan Kennicutt of Arapahoe, and many aunts, uncles, cousins, nieces and nephews. He is preceded in death by his grandma and grandpa Eidson. Viewing and visitation will be Thursday, December 2, 2021 from 4 PM till 8 PM at Wenburg Funeral Chapel, 652 Main St., Arapahoe, Nebraska. Funeral service will be Friday, December 3, 2021 at 10:30 AM at Trinity Lutheran Church in Arapahoe, Nebraska with Rev. James Moshier, officiating. Inurnment at a later date. Memorials may be left in his name and designated at a later date. Wenburg Funeral Home of Arapahoe, Nebraska is in charge of the arrangements. Condolences or personal reflections may be left at wenburgfuneralhome.com

To order memorial trees or send flowers to the family in memory of Jeremy David Eidson , please visit our flower store.