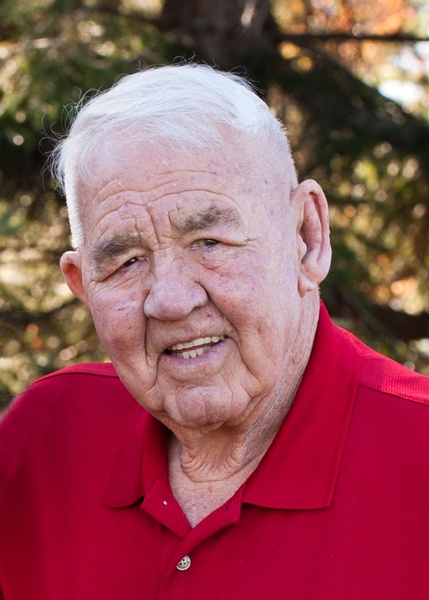 Jack Edward Bellamy, age 87, of Lincoln, Nebraska passed away on Monday, August 15, 2022 at his home.  He was born on June 25, 1935 to Ray and Hazel Bellamy of Moorefield, Nebraska and was the eighth child of nine.

He played football and track for Farnam High School and graduated as Valedictorian at 16. At this time, he owned his first car, a ‘35 Ford. After high school, Jack was a high jumper for Hastings College and attended University of Nebraska at Lincoln also. Following college, he took a summer job for Aramco Oil Company and traveled to different parts of the United States then spent 4 ½ years in Saudi Arabia.

Before returning to the States, he bought the John Deere Dealership with his older brother Kenneth in Elwood, NE, and named it the Bellamy Bros Implement. In 1962, he married Marlys Sunquist of Elwood, lived at Johnson Lake, and drove a ‘62 Falcon. They had four children: Bret, Tracy, Matt, and Kyle. In 1966, they moved to a farm outside of Elwood.

Soon after, he and Kenneth bought the John Deere store in Arapahoe and expanded the Bellamy Bros Implement. This job brought Jack and his family to Arapahoe in 1975. Jack was a pilot, a real estate agent, a country school math teacher, a Mason, a Shriner, an avid golfer, fervent poker player, and a voracious reader.

He retired from the implement business in 1989, spent his time restoring antique cars and belonged to several car clubs. He also sold XL Running Boards. He was very proud of the fact that he restored an antique car for each of his children.

Jack and his son Kyle built and raced cars at the Bonneville Salt Flats from 1992- 2010. His grandson Kameron joined them for the final year. In 2011, Jack and Marlys moved to Lincoln to be closer to their family. To celebrate their parents’ 50th anniversary, their kids surprised them with a ‘57 Thunderbird, which would be Jack’s final antique car. Jack resided in Lincoln until his death in 2022.

Survived by his wife Marlys of 60 years, sons Bret, Matt (Paula), Kyle (Michelle), and daughter Tracy. Five grandchildren: Kameron, Makenzy, Kyson, Jennifer, and Robbie, and great-grandchild Jordan; Brother - Kenneth (Doris), Sister-in-law Lloydelle, along with numerous family, countless friends and his beloved cat Mona Me’. He was preceded in death by his parents, and 7 of his siblings.

Graveside services will be Saturday, August 20, 2022 at 10:30 AM at Arapahoe Cemetery, Arapahoe, Nebraska with Pastor George Probasco, officiating. There will be no viewing or visitation. Garey Funeral Home of Arapahoe, Nebraska is in charge of the arrangements. Condolences and personal reflections may be left at https://www.gareyfuneralhome.com/. Memorials are suggested to the Arapahoe Public Library.

To order memorial trees or send flowers to the family in memory of Jack E. Bellamy, please visit our flower store.

No viewing or visitation.