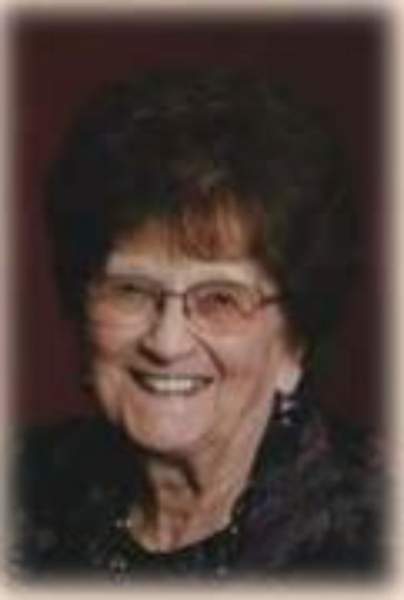 Irene Caroline Vandament, age 96, of Arapahoe, Nebraska passed away on Monday, November 12, 2018 at C.A. Mues Good Samaritan Center in Arapahoe, Nebraska, before celebrating her 97th Birthday on Friday, Nov. 16th . She was born November 16, 1921 to William G. and Caroline A. (Schieber) Missing at Holdrege, Nebraska. Irene was a lifelong member of Trinity Lutheran Church of Arapahoe, and was baptized on December 18, 1921 and was confirmed on May 29, 1938 at Trinity Lutheran Church. On January 24, 1942 Irene was united in marriage to Robert R. Vandament. Four children were born to this union, Bonnie, Jim, and twins Lana & Linda. Irene lived in the Arapahoe area her whole life except during the time of Bob’s duty in the Armed Services. After graduating from Arapahoe High School in 1940, Irene taught for one year at a country school northeast of Arapahoe and after her family got older she substituted at the Arapahoe Public School for several years. In August of 1969, Irene opened “Irene’s Style Shop” which she owned and operated until April of 2001. Irene’s Style Shop was a well-known ladies apparel shop and called the “Best Little Store between Omaha and Denver.” Irene’s Style Shop was her passion and she loved and missed the store till the day she died. Irene was preceded in death by her parents, husband Bob, brother George Missing, grandsons JR and Tracy Vandament and great-granddaughter Tesa Vandament, sisters-in-law and husbands, Olive & Al Schroeder, Doris & Paul Schroeder and Evelyn & Walt Tiedje. Those left to celebrate her life include her daughter Bonnie Kimberly of Holdrege, Nebraska; son Jim and wife Donna Vandament of Pryor, Oklahoma; and twin daughters Lana Birkmann Demuth and Linda Hamel and husband Mark of Arapahoe; six grandchildren: Brad and wife Tracy Kimberly, Alan Kimberly, Troy and wife Jennifer Vandament, Tyra and husband Darian Rains, Kristie and husband Matt Bridges and Karmin and husband Steve Powell, 18 great grandchildren; 10 great-great grandchildren, nephews, nieces, other relatives and friends. Viewing and visitation will be Thursday, November 15, 2018 from 5 PM to 7 PM with the family present from 6 PM to 7 PM at Wenburg Funeral Chapel, 652 Main Street, Arapahoe, Nebraska. Funeral services will be Friday, November 16, 2018 at 10:30 AM at Trinity Lutheran Church, Arapahoe, Nebraska with Rev. James Moshier, officiating. Interment will be at the Arapahoe Cemetery, Arapahoe, Nebraska. Memorial may be left to Trinity Lutheran Church of Arapahoe and the American Heart Association. Wenburg Funeral Home of Arapahoe, Nebraska is in charge of the arrangements. Condolences or personal reflections can be left at wenburgfuneralhome.com.

To order memorial trees or send flowers to the family in memory of Irene Caroline Vandament , please visit our flower store.