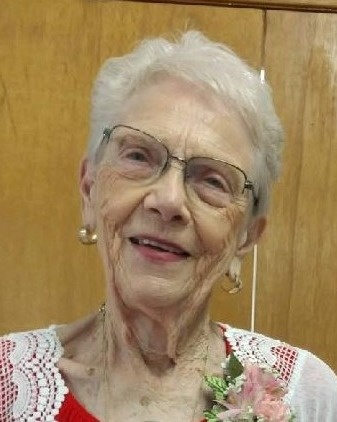 Ida Mae (Kuck) McBride, age 88 years, of Holbrook, Nebraska passed away on Monday, September 26, 2022 at CHI Good Samaritan Hospital, in Kearney, Nebraska. She was born in her Grandma Adden’s home, in Oxford, Nebraska in 100 degree heat, on July 8, 1934. She was the eldest of 5 children to Riley & Helen (Adden) Kuck. She was baptized at the First United Methodist Church in Arapahoe, Nebraska March 30, 1947.

She spent her childhood on farms around the Arapahoe area. She and her sisters would drive the milk cows each day to the river for water, then drive them back in the evening to milk.

Ida attended and graduated from the Arapahoe Public Schools with the Class of 1952. She attended her 70th Class reunion this past Memorial weekend with her remaining classmates.

She married Charles A. Breinig, on June 1, 1952. To this union 2 sons were born. Charles Douglas and Dennis James. At this time, she was blessed to gain her “special daughter” Brenda Kay. Charles & Ida Mae later divorced.

She loved to dance, especially the polka. It was at a community dance that she met, Jim McBride. They were married on July 24, 1993 in McCook, Nebraska. To this union added 2 stepdaughters to her family, twins Debby Noble and Donna Vallin.

While raising her family on a farm south of Arapahoe she wore many hats. Being a mom, a gardener, a farm wife, and being a B & B host in her home for the nieces for summer visits, as well as Dennis’s personal nurse, considering the many stitches that he seemed to always need. She may have even been known to have put some of those stitches in and removed them herself rather than hauling him into the doctor. She raised chickens, geese, greyhounds, and her horses Queenie & Old Queenie as well as her Shetland pony, Cricket, which may just have happened to make it into the house occasionally as far as the bathroom while she was dressing which Ida may have used a few “choice” words which cannot be repeated in front of the “little” ears. Those words may have also been used when calves or snakes would find their way into the house or the time when Jim was killing the rattlesnake on the road out to his farm with Ida screaming in the pickup. He did not know if the snake scared him more or Ida Mae screaming.

Ida was an honorary 4-H member and 4-H leader in the Arapahoe Baby Beef 4-H club and served on the Furnas County 4-H Council. She joined her many friends as a member of the Scarlet Ribbons and Arapahoe Horse Club, which they performed in many parades in the area. The Four County Twirlers square dance club, the Mid-Valley & Ever Ready Women Extension Clubs, The Wesleyan Circle and the Arapahoe United Methodist Women’s Group, and the Music Club in Holbrook.

Ida drove trucks for various farmers where she was known by her CB radio name “Gear Jammer.” She served 17 years as a bus driver for the Arapahoe-Holbrook Public School. She worked also as a bookkeeper at Faws Garage in Arapahoe and Howard Kool Chevrolet in McCook.

She was a great cook & baker. She knew how to use an “Insta-Pot” to cook meals in before it was even invented. To her it was just a pressure cooker. She was best known for her angel food cakes which were always requested the most by kids and grandchildren. She always was baking and taking them somewhere or to someone.

Ida was preceded in death by her parents, brother Joseph Kuck in infancy.

To order memorial trees or send flowers to the family in memory of Ida Mae McBride, please visit our flower store.