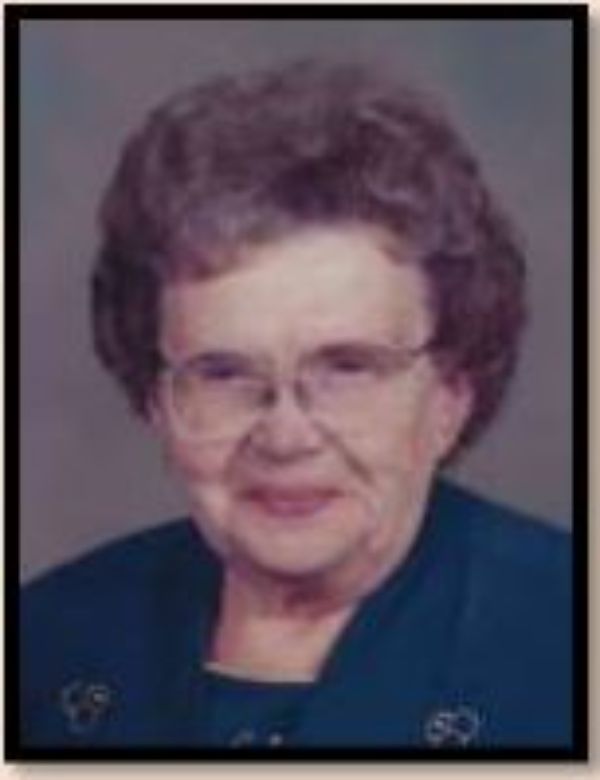 Grace Lydia Helms, age 98, of Arapahoe, Nebraska passed away on Sunday, August 12, 2018 at C.A. Mues Good Samaritan Center, Arapahoe, Nebraska. She was born on February 28, 1920 on the family farm west of Arapahoe, Nebraska as the only child to Herman and Augusta (Klein) Huxoll. At age 4, Grace began school at the Little Red Schoolhouse and could only speak German. Later, she would attend the rural St. Matthews parochial school through the 8th grade. She would then attend high school in Arapahoe, graduating with the class of 1936. After high school, she was employed by the Equity Store and the bank in Arapahoe. She was known to be an excellent employee and she thoroughly enjoyed her work. As was common of the era, Grace gave up her employment to become a very devoted wife and mother. On September 12, 1946, she married returning World War II veteran Edwin Helms at Trinity Lutheran Church in Arapahoe. The soulmates were blessed with 70 years of marriage before Edwin’s passing in 2016 at the age of 97. They had 3 children; John, Gary, and Jan Renee. Grace was a member of Trinity Lutheran Church in Arapahoe, Nebraska. She was baptized and confirmed at St. Matthews Lutheran Church. She was active in the church LWML, taught Sunday school, bible school and in her younger years was the church organist. Grace helped start the Arapahoe Senior Center and also helped deliver Meals on Wheels. She was very socialable belonging to many clubs. She was sweet, kind and loving friend to all. She especially loved her grandchildren and great-grandchildren. She had a sense of humor until the end. Preceding her in death were his parents and husband Edwin. Those left to miss her include her children, John and wife Peg Helms of Grand Island, Nebraska, Gary and wife Linda Helms of Kearney, Nebraska, Jan and husband Randy Peters of Loup City, Nebraska. Grandchildren: Chris (Shennon) Helms, Jennifer (Max) Bradley, Marcus Helms, Karlin (Jeremy) Warner, Lindsay (Nick) Gappa, Katie (Zach) Moul, Kori (Jesse) Peters-Roberts, 10 Great Grandchildren; Sisters-in-law; Ruth McGhgh, Lois Helms, and Doris Helms, many nieces, nephews and friends. In my Father’s house are many mansions: if it were not so, I would have told you. I go to prepare a place for you. John 14:2 Viewing and visitation will be Friday, August 17, 2018 from 6 PM till 8 PM at Wenburg Funeral Chapel, 652 Main Street, Arapahoe, Nebraska and prior to the service at the church. Funeral services will be Saturday, August 18, 2018 at 10:30 AM at the Trinity Lutheran Church with Rev. James Moshier, officiating. Interment will be at the Arapahoe Cemetery, Arapahoe, Nebraska. Memorials are suggested to the LWML, St. Matthews Cemetery, or donor’s choice. Wenburg Funeral Home of Arapahoe, Nebraska is in charge of the arrangements. Condolences or personal reflections can be left at wenburgfuneralhome.com.

To order memorial trees or send flowers to the family in memory of Grace Lydia Helms , please visit our flower store.
Send a Sympathy Card