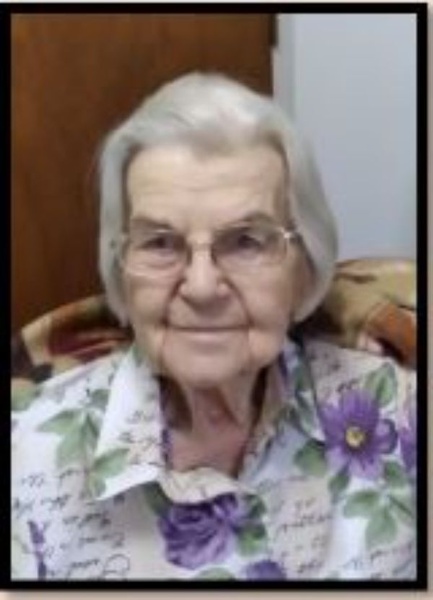 Elfrieda Helena Luhman spent Thanksgiving in Heaven. She passed away peacefully on Thursday, November 25, 2021 at the C.A. Mues Good Samaritan Center Nursing Home in Arapahoe, Nebraska where she has been a resident since May. She was born on January 30th, 1927 at her parent’s home north of Arapahoe, Nebraska. She was the sixth of seven children in the family of Emil and Agnes (Marquardt) Bloch. She was baptized on February 10, 1927 at the Immanuel Lutheran Church by Rev. Martin Schabacker. She attended Immanuel Lutheran Parochial School through the eighth grade and was confirmed by Re. Schabacker on May 18, 1941. Her confirmation verse was John 10:27-28. Elfrieda was active in her church and Walther League. She and her sister Elda entertained World War II returning troops at the Immanuel Lutheran Church singing and playing guitars. After school, she worked for various neighbors helping with household chores and child care. She also worked at the Oxford Chicken Factory and in the Lexington Beet Fields, also boarding in Arapahoe and working for the Doctor Merni family. It was while waitressing at the Derby Café she met her lifelong love, Ted Luhman. They were married on June 6, 1948 in a double ring ceremony with her sister Elda and Kenneth Stillman at Immanuel Lutheran Church. Ted and Elfrieda made their home in Arapahoe where Elfrieda continued to live until entering the nursing home in May. They were blessed with two daughters Jeannette (Huxoll) and Mary (Wolzen). Elfrieda was a homemaker, active in Lutheran Women’s Mission League and volunteered at the Mission Mall and nursing home. She also worked for several businesses in Arapahoe, her last employment being for her brother-in-law at Smitty’s in Holbrook. She loved having her grandchildren visit. They enjoyed playing games and cards. Grandma’s cookie jar always held special treats. Ted and Elfrieda spent their retirement years attending Antique Machine and Steam Engine shows. They made many lifelong friends and were honored as Grand Marshalls at the Clay Center Show. Elfrieda was known at the Trinity Lutheran Church as the “Birthday Lady”. She rarely missed calling everyone for their special day in over 30 years. It was very difficult for her to give up making birthday calls when her eyesight failed. As she especially loved talking to the little ones. With failing health, she relied on church service on Trinity’s radio station and listened faithfully to the Lutheran Hour. You could always count on her to know the initials on KRVN’s radio monogram money. Though her earthly home was humble she never expressed envy or discontent, always rejoicing in others prosperity and good fortune. Faith and family were uppermost important to her and she cherished visits, phone calls, and cards from family and friends. Preceding Elfrieda in death were her husband Ted, parents, mother & father-in-law, sister Elda and husband Kenneth Stillman, brothers Harold and wife Elvira, Edwin and wife Lucille Bloch, Walter, Leonard and wife Shirley, Emil and wife Karen, son-in-law Lynn Huxoll, sister and brother-in-law Dorothy and husband Clarence Schmid. Mourning her passing are her daughters Jeannette Huxoll of Arapahoe, Nebraska and Mary Wolzen and husband Kelvin of Sutton, Nebraska. Grandchildren: Shayne and Jennifer Huxoll of Palmyra, Nebraska, Robin and Chad Lemke of Deshler, Nebraska, Jeremy Wolzen of Omaha, Nebraska, Jessica and Jason La Follette of Syracuse, Nebraska, Mason and Emily Wolzen of Shawnee, Kansas. Great-Grandchildren: Paige and Elliott Zadow, Drew Huxoll, Dakotah, Jenna, and Brendan Lemke, Braden and Brogan La Follette, Zachary, Thomas, Ava, and Allyson Wolzen, sister-in-law Pauline Bloch and numerous nieces, nephews, family, and friends. There will be no viewing or visitation. Funeral services will be Monday, December 6, 2021 at 10:30 AM at Trinity Lutheran Church of Arapahoe, Nebraska with Rev. James Moshier, officiating. Interment will follow at the Immanuel Lutheran Cemetery of Arapahoe, Nebraska. Memorials are suggested to Immanuel Lutheran Cemetery and Rural Med Hospice Care. Wenburg Funeral Home of Arapahoe, Nebraska is in charge of the arrangements. Condolences and personal reflections may be left at wenburgfuneralhome.com

To order memorial trees or send flowers to the family in memory of Elfrieda Helena Luhman, please visit our flower store.
Send a Sympathy Card