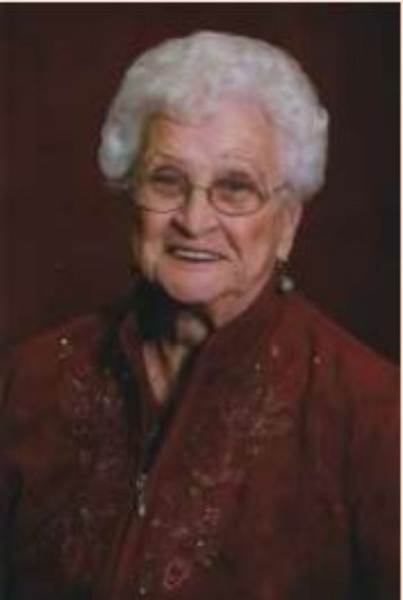 Eleanora Louise Haussler, age 97, of Arapahoe, Nebraska passed away on Tuesday, December 10, 2019 at C.A. Mues Good Samaritan Center, Arapahoe, Nebraska. She was born on March 25, 1922 in Gosper County, Nebraska to E.H. and Minna (Meyers) Huxoll. She was baptized on March 27, 1922 at St. Matthews Lutheran Church. She attended St Matthews Parochial School. On May 31, 1936 she was confirmed at St. Matthews Lutheran Church. Eleanora was one of five siblings: Gertrude (Rodenbeck), Art, Ervin, Eleanora, and twin brother, Elmer. Elmer died in infancy. The family lived on the farm in Gosper County northwest of the Muddy Creek. She was united in marriage to Ervin Haussler on January 1, 1941 at the Norton County Courthouse. Ervin and Eleanora returned to live at the Haussler Homestead until 1943 when they moved to a farm on the east side of the Muddy Creek. To this union, six children were born: Diane Ruth, Sherry Ann, Jeannen Kay, Terry Ervin, Kim Lenore, and Darcy Lynn. Eleanora was a loving wife, mother, and homemaker. She was involved in the community as a Sunday School Teacher and 4-H leader. When Ervin suffered a stroke in 1971, Eleanora took a job at the Arapahoe Schools, working there for 15 years. Ervin and Eleanora moved from the farm to Arapahoe in November of 1981. She lived there until she moved to the Sunshine Village and then to the Good Samaritan Center, where she resided until her death. While at the Sunshine Village, she enjoyed meeting with so many of her good friends for a lively game of Chicken Foot and Fast Track. She also enjoyed seeing her friends at the Senior Center in Arapahoe, or meeting at the Arapahoe Pharmacy for her favorite drink, Dr. Pepper. Eleanora is survived by her children and spouses Sherry (Alan) Schievelbein of Arapahoe, Nebraska, Jeannen (Bill) Hobbs of Missouri, Terry (Vicky) Haussler of Arapahoe, Nebraska, Kim (Dean) Fisher of Arapahoe, Nebraska, Darcy (Ron) Gardner of Edison, Nebraska, son, 15 Grandchildren: Kurt (Lisa) DeVries, Tim (Kathy) DeVries, Suzanne (Max) DeVries- Swantek, Joel (Michelle) DeVries, Matt DeVries, Shayna (Dan) DeVries-Brabec, Jason (Lori) Schievelbein, Amy (Chris) Schievelbein-Schoff, Jeff Upward, Ryan Hobbs, Kristin (Adam) Hobbs-Urhan, Torri Haussler, Trev Haussler, Carrye (Jim) Fisher-Schwarz, Kelly Fisher-Wren, 28 Great-Grandchildren, and 2 Great-Great Grandchildren. Eleanora was preceded in death by her parents, husband Ervin, brothers and sisters, daughter Diane DeVries and husband Charles, great-granddaughter Morgan Hobbs-Kinder Viewing and visitation will be Thursday, December 12, 2019 from 5 PM to 7 PM at the Wenburg Funeral Chapel, 652 Main St., Arapahoe, Nebraska. Funeral services will be Friday, December 13, 2019 at 10:30 AM at the Trinity Lutheran Church of Arapahoe, Nebraska with Rev. James Moshier, officiating. Interment will be at St. Matthews Cemetery, Arapahoe, Nebraska. Wenburg Funeral Home of Arapahoe, Nebraska is in charge of the arrangements. Condolences or personal reflections can be left at wenburgfuneralhome.com

To order memorial trees or send flowers to the family in memory of Eleanora Louise Haussler, please visit our flower store.
Send a Sympathy Card