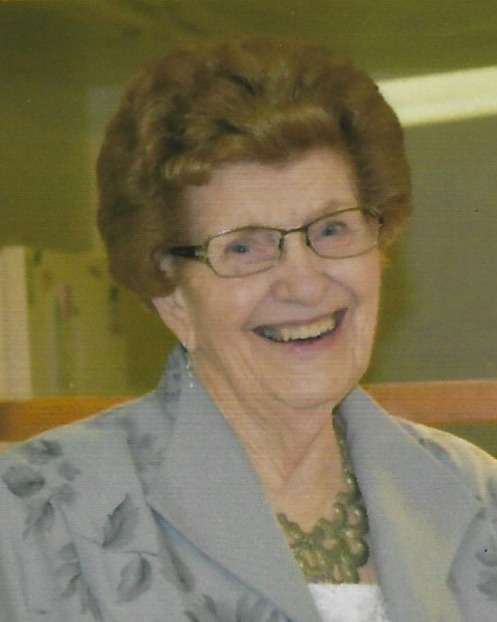 Eleanor Christine Schneider Nott peacefully passed into the loving arms of her Heavenly Father at the age of 95, on Tuesday, November 14, 2022 at Holdrege Memorial Homes in Holdrege, Nebraska. She was born April 1, 1927, in Holbrook, Nebraska, to William and Louise (Siekjost) Schneider.

Eleanor grew up south of Eustis, graduating with the Elwood High School class of 1944. She was a school teacher at a rural, one room schoolhouse where she met a local farmer, Raleigh D. Nott. They married November 30, 1947 and created a family on their farm south of Elwood, Nebraska, where they resided until 1994 when they moved to their home in Elwood.

Eleanor was a pillar in her family, church, and community. She gave endlessly as a member of many committees at Our Redeemer Lutheran Church, Ladies Aid, the Pleasant Hill Club, and the American Legion Auxiliary. She was a volunteer at the Red Cross, Gosper Co. Senior Center, Gosper Co. Fair Activities, and the Elwood Care Home.

She found great happiness dancing, painting, attracting and watching birds, quilting, participating in card clubs, and being surrounded by her family. Her joyous demeanor through all things in life will be missed by all who knew her.

She was preceded in death by her husband Raleigh, daughter Sherol Louise, parents, brothers Carl and Robert, and sister Wilma.

There will be a luncheon at the church. In lieu of flowers, memorials are suggested to Our Redeemer Lutheran Church, the Gosper County Senior Center, or a cause of your choice. Elwood Funeral Home of Elwood, Nebraska is in charge of the arrangements.

To order memorial trees or send flowers to the family in memory of Eleanor Christine Nott, please visit our flower store.