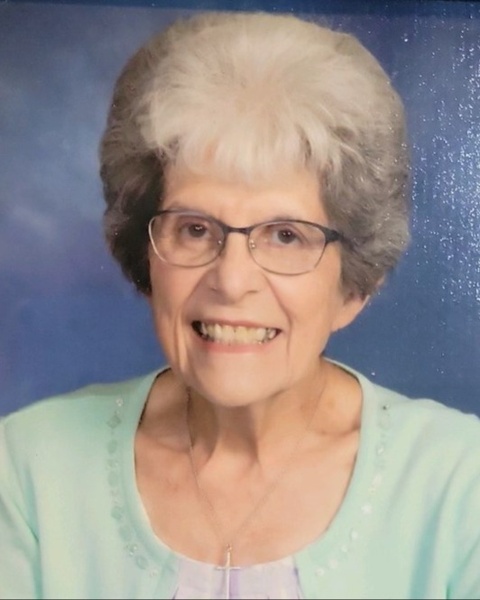 Elaine Marie (Wieser) Swanson, age 81, of Norwalk, Iowa, passed peacefully from this life on Monday, September 26, 2022 at Norwalk Nursing & Rehab Center, Norwalk, Iowa.  She was born on April 25, 1941 in Platte County, Nebraska.  She was the eleventh child of Vincent Wieser and Wilamina “Minnie” (Kopetzky) Wieser.

Elaine grew up and attended primary and secondary schools at St. Bonaventure Parochial School in Columbus, NE. Elaine was a very good student and advanced quickly through her education. She decided on the nursing profession and became a registered nurse.  She later went on to complete her Bachelor of Science Degree in nursing. Elaine entered into marriage with William Richard Swanson on June 30, 1962.  Their union produced seven children. Paula Marie (married to Richard Lau), Brenda Sue (married to John Walsh), Angela Lea (married to Kevin Nurre), Elizabeth Ann (married to Jon Best), Anthony William (married to Cathy Breen), Nathaneal Floyd (married to Cortney Peters) and Kathryn Elaine (married to Gregory Baran). She also had 21 grandchildren and 1 great grandson.

Bill and Elaine were active and well-loved members of the Arapahoe community and Saint Germanus Catholic Church.  Elaine was known throughout the community as an able caretaker and attended births, deaths, and everything in between for the residents of Arapahoe.  She was a part of the Altar Society and played an integral role in maintaining the Shrine of Fatima and the installation of the Rachel Statue which was representative of the Pro-Life Movement of which she was deeply involved.  Elaine participated in many volunteer activities including the Cursillo Movement of the Catholic Church, Community Food Bank, and PEO—a philanthropic organization.  Elaine endeavored to live her life in service to others.  She passed on this value to her many children and grandchildren.

Elaine is preceded in death by her beloved husband, Bill. Her parents, Vincent and Minnie, her siblings:  Leander Wieser, Charles Wieser, Albert Wieser, Francis Wieser, Glenn Wieser, Mary Ann Micek, Sister Alberta Wieser, and Irene Fuchs. She is survived by Jerome and Helen Wieser, Ken and Judy Wieser and Delores Wieser, Howard and Dixie Lederer as well as many nieces and nephews.

Thank you to our guests. We know Arapahoe can be a bit of a drive, but we love Arapahoe. It has become home to our family. Our beloved mom will be laid to rest by our dad in the Arapahoe Cemetery.

In lieu of flowers and monetary gifts, Elaine has requested masses be offered in her name.

To order memorial trees or send flowers to the family in memory of Elaine Marie Swanson, please visit our flower store.