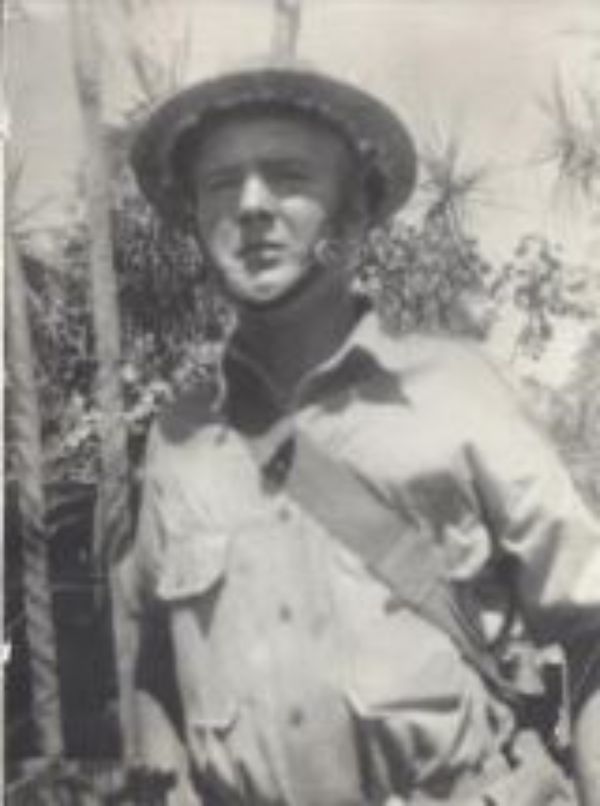 Edwin Otto Gustav Helms, age 97, of Arapahoe, Nebraska passed away on Tuesday, December 13, 2016 at the Elwood Care Center, Elwood, Nebraska. He was born on August 22, 1919 on the family farm 10 miles northeast of Arapahoe, Nebraska to Henry & Bertha (Hinz) Helms. He was baptized in the Christian Faith at Immanuel Lutheran Church 1 ½ miles west of the farm on October 3, 1919 by Pastor A.L. Grasons and confirmed there on March 25, 1934 by Pastor Martin Schabacher. He attended Immanuel Parochial School with Prof. Edwin Wolher and Pastor Martin Schabacher as teachers. Edwins interests were agricultural; being busy farming, when he was drafted into the U.S. Army on July 8, 1941. He embarked on the USAT Willard A. Holbrook at San Francisco on November 22, 1941 as a member of the 148th F.A. Battalion. This ship became a part of the U.S.S. Pensacola Convoy on Dec. 2, 1941. This convoy was one week west of the Hawaiian Islands on Dec. 7, 1941 bound for the Philippines. In February of 1942 he was a member of the U.S.S. Houston Convoy on the Timor Sea in a Chinese ship the Talagi. They were bombed by enemy forces and were turned back from Timor. They landed in Darwin, Australia where they were bombed in the harbor and many ships were sunk. He had to abandon ship and also bombed in Darwin many times after that. Thus started the long slow move from Island to Island until finally arriving in the Philippines 4 years later. The ensuing years he served in Australia, New Guinea, Kiriwina in the Trobriand Islands, New Britain, and Luzon Island in the Philippines. He was an artillery radio forward observer with the infantry and observed on forward observation posts. He received his honorable discharge on August 6, 1945 having served 42 months overseas. In November of 1945 he was employed by the U.S. Bureau of Reclamation, where he served in the Kansas River District till retiring in 1976. On September 12, 1946 he married Grace Huxoll at Trinity Lutheran Church, in Arapahoe, Nebraska. To this union 3 children were born; John, Gary, & Jan Renee. On September 12, 2016, they celebrated 70 years of marriage. Ed was a very kind, generous, honest, & intelligent person, with interests in growing flowers and trees. Edwin is survived by his wife Grace Helms of Arapahoe, Nebraska, and sons: John & wife Peggy Helms of Grand Island, Nebraska, Gary & wife Linda Helms of Kearney, Nebraska, Jan & husband Randy Peters of Loup City, Nebraska, 7 grandchildren-Christopher (Shennon) Helms, Jennifer (Max) Bradley, Marcus Helms, Karlin (Jeremy) Warner, Lindsay (Nick) Gappa, Katie (Zack) Moul, & Kori Peters 9 great- grandchildren; Alex, Amanda, & Aiden Helms, Mitch, Mariam, & Julia Grace Bradley, Henry Otto Moul, Jaymeson & Ashlyn Gappa. Sister: Ruth McGhghy of Fort Collins, Colorado, Sisters-In-Law: Lois Helms of Arapahoe, NE & Doris Helms Edwin was preceded in death by his parents, sisters Viola (Reinhold) Monter, Bertha (Herman) Evers, Edna (Richard) Downing, Loreen (Gene) Flicker, Alice Helms, Lucilla (Roscoe) Carr, Brothers: Reinhold (Tillie) Helms, Clarence Helms, Henry (Lillian) Helms, Condolences or personal reflections may be left at wenburgfuneralhome.com Viewing and visitation will be Sunday, December 18, 2016 from 1 PM till 8 PM with family present from 6 pm to 8 pm at Wenburg Funeral Chapel, 652 Main Street, of Arapahoe, Nebraska. Funeral services are Monday, December 19, 2016 at 10:30 AM at Trinity Lutheran Church of Arapahoe, Nebraska with Rev. James Moshier, officiating. Interment will be at the Arapahoe Cemetery, at Arapahoe, Nebraska with military honors provided by the Arapahoe American Legion Post #96 and U.S. Army Funeral Honors Guard. Memorials are suggested to Lutheran Hour or donor’s choice. Wenburg Funeral Home of Arapahoe, Nebraska is in charge of the arrangements.

To order memorial trees or send flowers to the family in memory of Edwin Otto Gustav Helms, please visit our flower store.