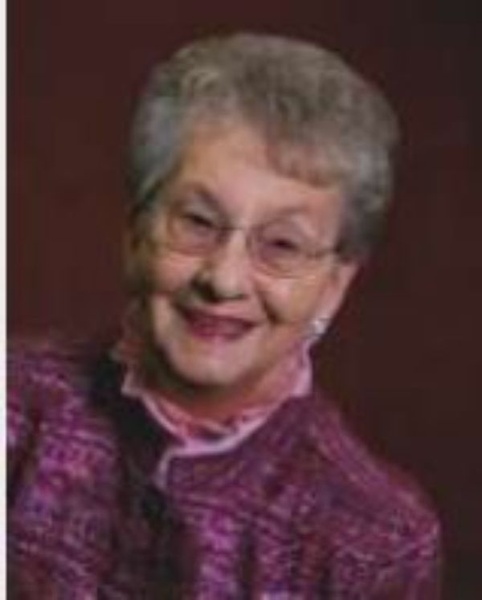 Edith Ann Hinz, age 83, of Arapahoe, Nebraska, passed away on Sunday, May 27, 2018 at Cambridge Memorial Hospital, Cambridge, Nebraska. She was born on September 12, 1934 at Arapahoe, Nebraska to Harry and Ella Mae (Fletcher) Riepe. Edith graduated from Arapahoe High School with the class of 1952. She married Frank Hinz on June 7, 1954. To this union three sons were born; Gary, Terry, and Roger. They made their home in Arapahoe while Edith worked at Wagner’s Supermarket. They would move to Aurora, Colorado in 1980, were Edith would work for Continental Airlines. They moved back to Arapahoe in 1990. Her husband Frank would pass away on July 8, 2001. Edith would then move to Sunshine Village in Arapahoe. She was a member of the Trinity Lutheran Church and LWML. She enjoyed being part of the Women’s Bowling League in Arapahoe and later in Cambridge. She loved playing cards games, Bingo, and having coffee time with all her friends. She was preceded in death by her parents, husband Frank, brothers Wayne and Delbert “Shine” Riepe, sister Colleen and husband Don Yeager, sister-in-law Evelyn and husband Elmer Nichols, brother-in-law Rodney Hinz. Great Grandson Alec Jackson. She is survived by her 3 sons: Gary and wife Rhonda Hinz of Arapahoe, Nebraska Grandchildren: Angie (Scott) Moore and Jacob & Lauren Toby (Brooke) and Reece Brandy (Tyler) and Talan & Bryn Terry and wife Sandy Hinz of Crosby, Texas Grandchildren: Craig (Sarah) and Alyssa and Austin. Tara (Doug) and Preston Brittany (Matt) and Lilly Roger and wife Paula Hinz of Arapahoe, Nebraska Grandchildren: Kristi (Josh) Phillips and Spencer and Sophia Joni (Kendall) Christensen and Landon & Bryer Kayla (Adam) Becker and Allie & Oliver Brother: Jim and wife Karen Riepe of Englewood, Colorado, Sisters: Dorothy and husband Norman Huxoll of Holbrook, Della Mae VonLoh of Arapahoe Nebraska, Sisters-In-Law: Brenda Riepe of Truth or Consequences, New Mexico and Pearl Hinz of Arapahoe, and a host of relatives and friends. Condolences or personal reflections may be left at wenburgfuneralhome.com Visitation will be Thursday, May 31, 2018 from 2 PM till 8 PM at Wenburg Funeral Chapel, 652 Main Street, Arapahoe, Nebraska. Funeral services will be Friday, June 1, 2018 at 10:30 AM at Trinity Lutheran Church of Arapahoe, Nebraska with Rev. James Moshier, officiating. Interment will be at the Arapahoe Cemetery, Arapahoe, Nebraska. Wenburg Funeral Home of Arapahoe, Nebraska is in charge of the arrangement.

To order memorial trees or send flowers to the family in memory of Edith Ann Hinz, please visit our flower store.
Send a Sympathy Card