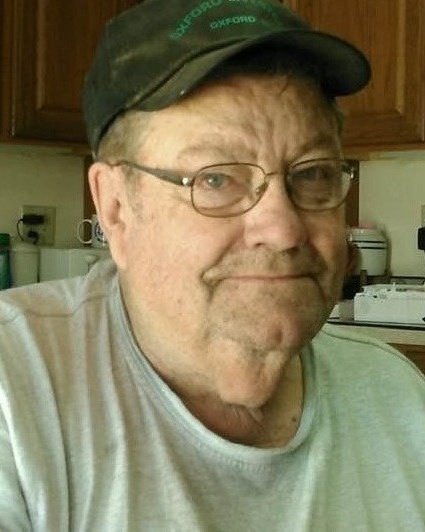 Doug McCann, age 80, of Edison, Nebraska passed away Tuesday, September 20, 2022, at Phelps Memorial Hospital, Holdrege, Nebraska. He was born May 5, 1942, to Howard and Lois (Brawner) McCann at the Oxford Hospital, Oxford, Nebraska. The youngest of three children.

He graduated from Edison High School, then attended Hastings College where he went out for football. He continued his education in Springfield, Illinois. Returning to Edison, he became assistant manager of the Edison Co-op and later managed the Edison Co-op Feed Mill. Doug lived all his life in Edison except for three years he managed the Co-op elevator in Benkelman. He met Donna Smith from Arapahoe and they were married on February 2, 1964. To this union four children were born; Annette, Karla, Tony, and Matthew.

Doug always wanted to be an Auctioneer, so in 1970 he went to Auctioneer School. He was 28 years old. Tracy Broeker said, “Don’t you think your too old to change your occupations?” He enjoyed his life’s work as an auctioneer with Duane Murdoch and later with his son Matthew. Doug and his brother-in-law Gene Glanzer owned the Oxford Livestock Barn for many years. He donated his talent to Furnas County 4-H Livestock Sale, Boy Scouts Cake Auction, FFA Slave Auction, and Pheasants Forever Banquets. He loved Edison and said he didn’t want to live anywhere else. He served on the town board, as Mayor, and a fireman for many years. He was active in 4-H and a 4-H leader. He enjoyed playing cards and drinking coffee and playing cards at Shafer’s shop.

He was the best DAD and Grandpa a kid could ask for. Those left to cherish his life are his wife of 58 years, Donna, children Annette McCann of Edison, Karla (Jim) Whipple of Cambridge, Matthew (Nadia) McCann of Grand Island. Grandchildren Emily Whipple (Kyle Jackman) of Ainsworth, Tony Whipple of Cambridge, Sean Whipple of Ohio, Mitchell, Maxwell, and Marshall McCann of Grand Island, sister Shirley Griesbach and family, sister-in-law Kay McCann and family, Bert Smith and family, brothers & sisters-in-laws Gene and Joetta Glanzer, Dennis and Margie Gardner, Glen and Karleeta Chapel, and many nieces, nephews, and friends.

Funeral Services will be Saturday, October 1, 2022 at 10:30 a.m. at the Edison Christian Church with Pastor Kirk Einspahr, officiating. Burial will follow at Edison Cemetery, Edison, Nebraska. Viewing and visitation will be Friday, September 30, 2022 from 4 p.m. to 8 p.m. with family present from 5 p.m. to 7 p.m at the Garey Funeral Chapel, 652 Main St., Arapahoe, NE. Garey Funeral Home in Arapahoe, Nebraska is in charge of arrangements. Memorials are suggested to the Edison Cemetery, Edison, Nebraska.

To order memorial trees or send flowers to the family in memory of Douglas H. McCann, please visit our flower store.
Send a Sympathy Card

Family Present from 5 PM till 7 PM