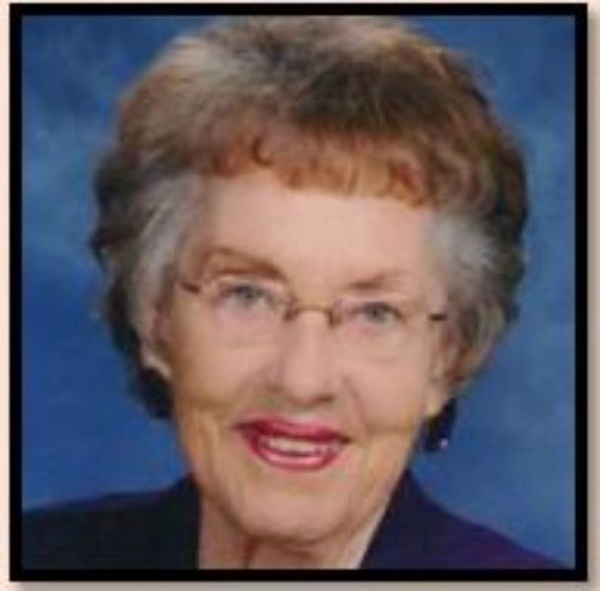 Dorothy Clara (Luhman) Schmid passed away peacefully on November 15, 2018 at her assisted living home in Centennial, Colorado just five days before her 93rd birthday. Dorothy was born November 20, 1925 in Cambridge, Nebraska to William and Martha (Frank) Luhman and lived in the Holbrook, Nebraska area until moving to Colorado in 2005. At one month old, Dorothy was baptized on December 20, 1925 at Trinity Lutheran Church in Arapahoe, Nebraska and was later confirmed on April 2, 1939 at St. John’s Lutheran Church in Denver, Colorado. She graduated as valedictorian from Holbrook High School in 1943 and attended Midland College in Fremont, Nebraska followed by Valparaiso University in Valparaiso, Indiana. Dorothy married Clarence “Smitty” Schmid on January 20, 1946 in Arapahoe, Nebraska, and they were married for 57 years before “Smitty” passed away. They lived their married life on a farm south of Holbrook, Nebraska and later in the Village of Holbrook. The couple had three daughters: Phyllis, Cecelia (Knoll) and Claire (Glatki). As a dedicated wife and mother, Dorothy diligently cared for her daughter Phyllis who had special needs. When the time came for additional care, Phyllis moved to Bethesda Lutheran Home at the age of twelve. All the while, Dorothy was very involved with the activities of her two other daughters, Cecelia and Claire, especially as a 4-H leader who influenced the lives of many girls in the “Klassy Klovers” 4-H club. She valued education and encouraged her daughters throughout their academic years. Dorothy later became an active member of the Holbrook School Board which included the decision to merge the neighboring Holbrook and Arapahoe Schools. She also supported her husband in their ownership of Smitty’s Tavern and as “First Lady” of Holbrook when he was Chairman of the Village Board. In her professional life, Dorothy worked for the United States Department of Agriculture for 25 years as Program Assistant in charge of Production Adjustment at the ASCS Office in Beaver City, Nebraska. Working with farmers brought her great joy and a sense of accomplishment. Always wanting to stay busy, Dorothy continued to work part-time for Dawson and Associates in Arapahoe, Nebraska after retiring from the ASCS. As an active member of the Holbrook/Arapahoe community, Dorothy participated in Lutheran Women’s League, Holbrook Women’s Club and the Library Board as well as the Music Club, Holbrook Cemetery Board, and as a member of the Board of the Central Plains Development Center. She was also a volunteer at the Holbrook/Arapahoe School. In her free time, Dorothy was an avid card player: pinochle, pitch, bridge, poker, gin rummy, war, etc. This love of cards has been passed down to her daughters, grandchildren, and especially her great-grandchildren. She was a loyal fan of Nebraska football, even cheering on the Huskers during her last days. The family cabin at Johnson Lake allowed Dorothy to share her love of the water and her boat with family and friends. She and “Smitty” loved to travel, especially on cruises and bus tours. Many fun times were spent with friends on trips and on visits over the years to see their daughters in Wisconsin, Colorado, Massachusetts, and South Carolina. Dorothy is survived by her daughter, Cecelia Knoll and son-in-law Bill Knoll of Centennial, Colorado, and by her daughter, Claire Glatki, of Murrells Inlet, South Carolina. She is also survived by her five grandchildren: Will Knoll and wife Jen; Sara and husband Greg Squires; Zach Knoll and wife Erin; Travis Glatki and wife Jennifer; Hannah and husband Gregory Boisvert. Dorothy felt very blessed with the time she was given with her seven great-grandchildren as well: Ava and Jack Knoll; Nathan and Nora Squires; and Zachary, Madelene, and Jhett Knoll. Dorothy is also survived by two sisters-in-law: Elfreida Luhman of Arapahoe, Nebraska, and Minnie Ann Jackson of Omaha, Nebraska, four nieces, and many other friends and “youngsters” to whom she meant so much. Dorothy was preceded in death by her parents William and Martha, her husband Clarence, her brother Ted, her daughter Phyllis, and her son-in-law Gary Glatki. Graveside service will be Saturday, September 14, 2019 at 1 PM at Holbrook Cemetery, Holbrook, Nebraska with Rev. James Moshier, officiating. Wenburg Funeral Home of Arapahoe, Nebraska is in charge of the arrangements. Condolences and personal reflections can be left at wenburgfuneralhome.com

To order memorial trees or send flowers to the family in memory of Dorothy Clara (Luhman) Schmid , please visit our flower store.