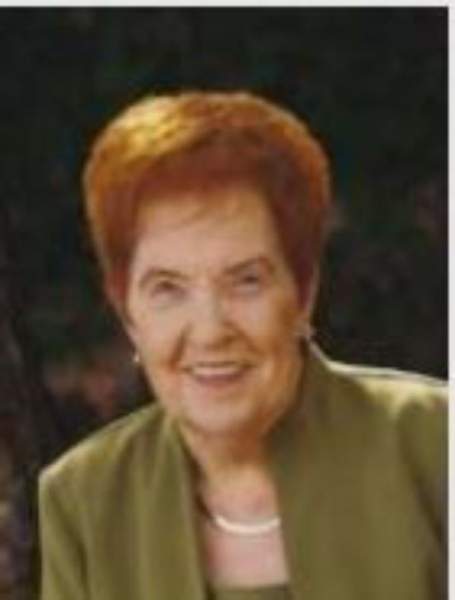 Charlotte Axelyn Hill, age 92, passed away peacefully on Tuesday, November 19, 2019 in Arapahoe, Nebraska. Charlotte was born on June 19, 1927 to Reverend Arthur H. and Gladys (Malmrose) Peterson. She graduated from Ceresco High School in Ceresco, Nebraska and attended Luther College in Wahoo, Ne. She played half-court basketball on a women’s team while in college. Following college, she moved to Lincoln where she worked as a secretary in the State Capitol. She worked with Ralph Hill Jr.’s mother there and that’s how she met her future husband. They were married on Sept. 4, 1948 and were eventually blessed with 4 children. She will be lovingly remembered as a devoted wife, mother, grandmother, and great-grandmother. She was very friendly and generous and loved nothing more than family gatherings. Many people were eager to gather at her house from every Christmas Eve to Easter dinner and even to breakfast on the patio. She’d serve her famous cinnamon rolls which were eventually renamed GIGI rolls. Every square on her calendar was crammed full of activities like golf, bridge, and community concerts. She had long telephone conversations that sometimes lasted late into the night. But her passion was shopping! Now let’s talk about the shopping. It was to McCook in the early years, Grand Island, Lincoln, and Omaha in the middle years, and when she could no longer drive, she managed to shop QVC every day on her television! She’d find all of the bargains and she’d buy one in every color. If you didn’t like the size or color she’d bought for you for Christmas, you could go downstairs to the “department store” in her basement to exchange it. More than likely she’d have a different color and a different size! Charlotte was a great cook. We struggle to make all of her dishes as unfortunately she didn’t write many of the recipes down. No matter how hard we try, some things just don’t taste the same. She was a member of the First United Methodist Church, UMW, and Chapter CE PEO, all in Arapahoe, Ne. She worked as a secretary at the Arapahoe Coop, Grow Nebraska, and Hunt Nebraska. Charlotte was preceded in death by her husband, Ralph Hill, Jr. parents, Rev. Arthur and Gladys Peterson, stepmother, Svanhild Peterson, brothers Paul and Wendall Peterson, sister Arlys Patzloff, and infant great granddaughter Zoey Hill. She is survived by her children; Mike (Linda) Hill, Lincoln, Nebraska, Sandy (Mick) Kinsella, Omaha, Nebraska, Greg (Connie) Hill, Arapahoe, and Peggy (Mike) Haskins of Omaha. Grandchildren; Piper De Los Santos, Lincoln Nebraska, Trevor (Andrea) Hill, Grand Island, Nebraska, Kylie Hill and fiancé’ Ben McKnight, Bettendorf, Iowa, Betsey (John) Machian, Torrance, California, Pat (Dannette) Kinsella, O’Fallon, Illinois, Shawn Kinsella, Omaha, Nebraska, Josh (Jill) Hill, McCook, Nebraska, Dustin (Jessy) Hill, Columbus Nebraska, Cody (Shayla) Hill, Arapahoe, Nebraska, Misty (Brandie) Hill, Nebraska City, Nebraska, Ryan (Kristal) Haskins, Keller, Texas Andrew, (Erin) Haskins, Fairview, Illinois, and Alex (Daltynn) Haskins, Omaha, Nebraska, great grandchildren total 27 and include Mariah, Mikaela, Madison, Chloe, Axley, Lynlee, Beau, Axelyn, Jack, Thomas, Joseph, Will, Lydia, Macy, Brynn, Rafe, Briggs, Miles, Malcom, Maven, Finley, Ezra, Swayze, Abby, Lilly, Whitney, and Zayne. Sister-In-Laws: Ara Jane Hill of Omaha, Nebraska and Ruby Peterson of Dallas, Texas. Mom, Grandma, and Gigi will be missed by her family and many friends. Her red-headed spirit and love of life will live on in our hearts and live forever. Viewing and visitation will be Sunday, November 24, 2019 from 4 PM till 6 PM at Wenburg Funeral Chapel at 652 Main St., Arapahoe, Nebraska. Celebration of Life services will be held on Monday, November 25, 2019 at 10:30 AM at the First United Methodist Church in Arapahoe, Nebraska with Rev. Becky Saddler, officiating. Interment will follow at Arapahoe Cemetery, at Arapahoe, Nebraska. Wenburg Funeral Home of Arapahoe, Nebraska is in charge of the arrangements. Condolences or personal reflection can be left at wenburgfuneralhome.com

To order memorial trees or send flowers to the family in memory of Charlotte Axelyn Hill, please visit our flower store.