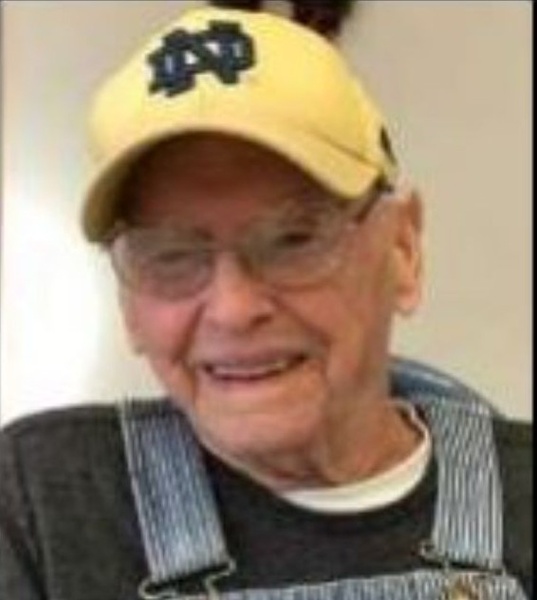 Alfred Jay Cass went to his Heavenly home on Wednesday, June 30, 2021, at the Beaver City Manor, Beaver City, Nebraska, at the age of 102. He was just one week short of celebrating his 103rd Birthday. He was born on July 8, 1918, to Alin and Cecile (Clason) Cass at their home, southeast of Beaver City. He graduated from Beaver City High School in 1937 and after completing Normal Training, he taught in a country school for a short time. On April 9, 1939, he married Lola McConnell, who died on July 1, 1941, after giving birth to their daughter, Lola Gail. On July 12, 1942, he married Mildred Hilton, who died on January 29, 1999. At the time of her death, they had been married for fifty-seven years. He spent his entire life farming and raising cattle. He also worked the rings at the Beaver City, Oxford, Alma, and Lexington Sale Barns. He loved horses and belonged to the Beaver City Saddle Club. He also loved his land and had a name for some of his properties: the "Downing Place", the "Bottom", the "Pines", and the "Other Place" which had been in his family for over 100 years. He served on both the Beaver City Senior Center Board and the Beaver City Town Council. He attended Faith Community Church. He was known for his prowess at playing cards, particularly the game of Pitch. There was not a family gathering where Pitch was not an integral part of the get together. Children and grandchildren alike were expected to learn how to play. He was still playing cards at the Manor when family came to visit. He lived through the Dust Bowl, the Great Depression, and the Covid Pandemic of 2020, and was witness to an amazing number of inventions in his lifetime, including the first automobile. Over his many years, he was generous and supportive of people behind the scenes. He leaves a legacy of quiet strength, a strong work ethic, and an iron resolve in tough times. He was loved and will be greatly missed by his family. He is survived by his brother, Bob Cass of McDonald, Kansas, his five daughters: Gail and husband Larry Peterson of Imperial, Nebraska, Judy and husband Ron Bruening of Omaha, Nebraska, Terry and husband Milt Slama of Beaver City, Nebraska, Jodene and husband Jeff Plank of Saint John, Indiana, and Bobbi and husband Bill Henthorn of Warsaw, Indiana. He is also survived by 16 grandchildren, 40 great-grandchildren, and 14 great-great grandchildren. He was preceded in death by his parents, Alin & Cecile Cass, two brothers, Junior and Dean Cass, and his sister Eula Mae Lush; his wife Lola and his wife of 57 years, Mildred; his grandson Roland Slama, his granddaughter Ashley Plank, and his great granddaughter Faith LaMunyon. Viewing and visitation will be Friday, July 9, 2021 from 4-6 PM at the Wenburg Funeral Home, 709 9th St., Beaver City. Graveside service will be held on Saturday, July 10, at 12:30 PM, at the Mount Hope Cemetery in Beaver City, Nebraska with Pastor Daryl Kats, officiating. Family and friends are invited to lunch at Faith Community Church following the service. Memorials may be made in his name to either the Beaver City Senior Center or Faith Community Church. Wenburg Funeral Home, of Beaver City, Nebraska is in charge of the arrangements. Condolences and personal reflections may be left a wenburgfuneralhome.com

To order memorial trees or send flowers to the family in memory of Alfred Jay Cass, please visit our flower store.
Send a Sympathy Card